Speaking of Servals it is time that I introduced you to three big eared, long legged, spotty awesome animals that have crept into my heart (and the hearts of many others) over the past four and a half years. I have been in the very fortunate position to be charged with the honor and privilege of hand raising and training them for their role at the Werribee Zoo.
They are the tallest of the African small cats and are found throughout Africa in grassland habitats. They are reliant on water and a predominantly rodent diet that they locate with their exceptional hearing ability. They are also the longest legged cat in the world and can jump three vertical meters to catch a bird in flight.
They were three months old when they arrived from Mogo Zoo in New South Wales. They were specifically bred there for their role with us and got their first human contact from two weeks of age. 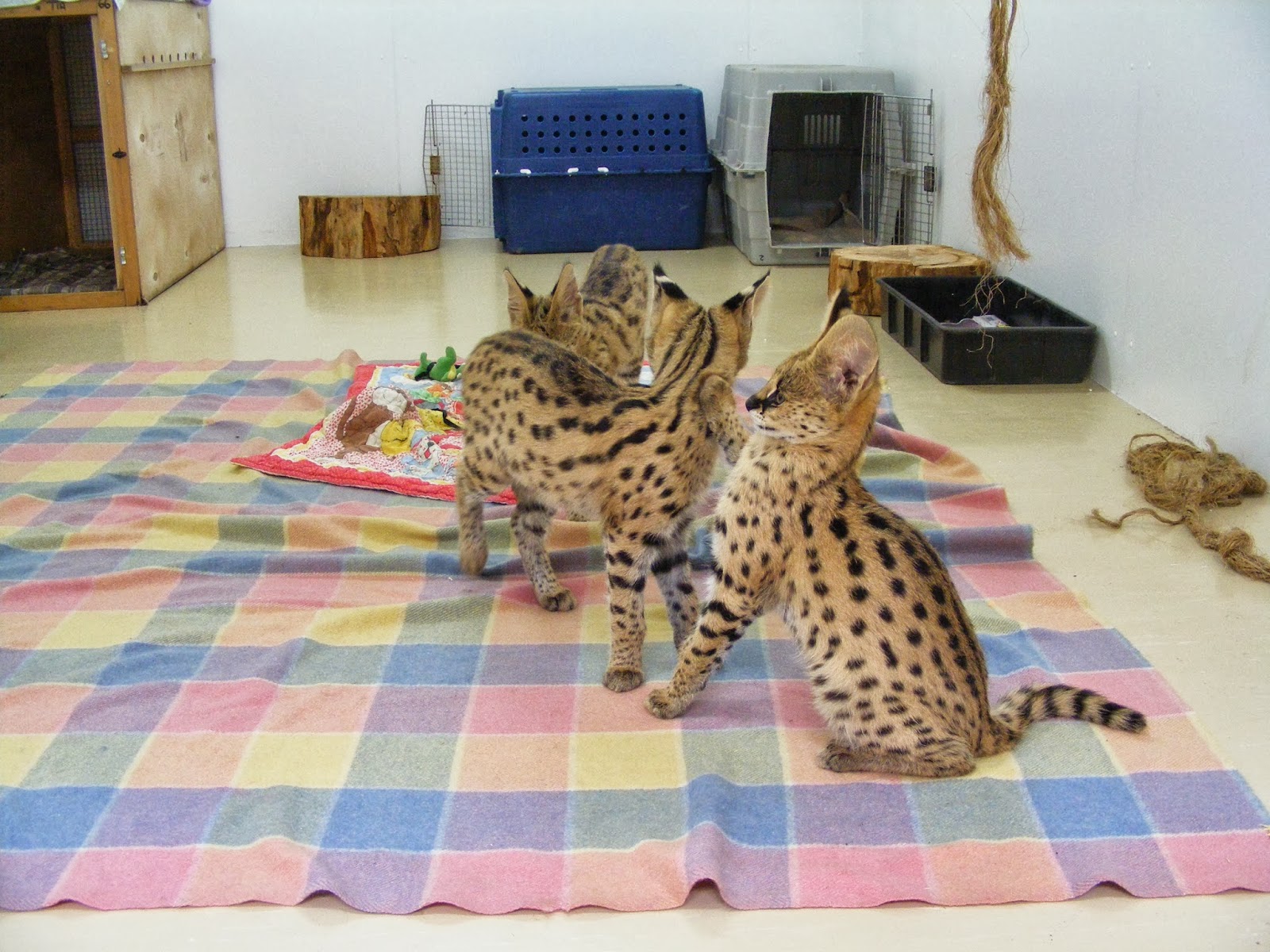 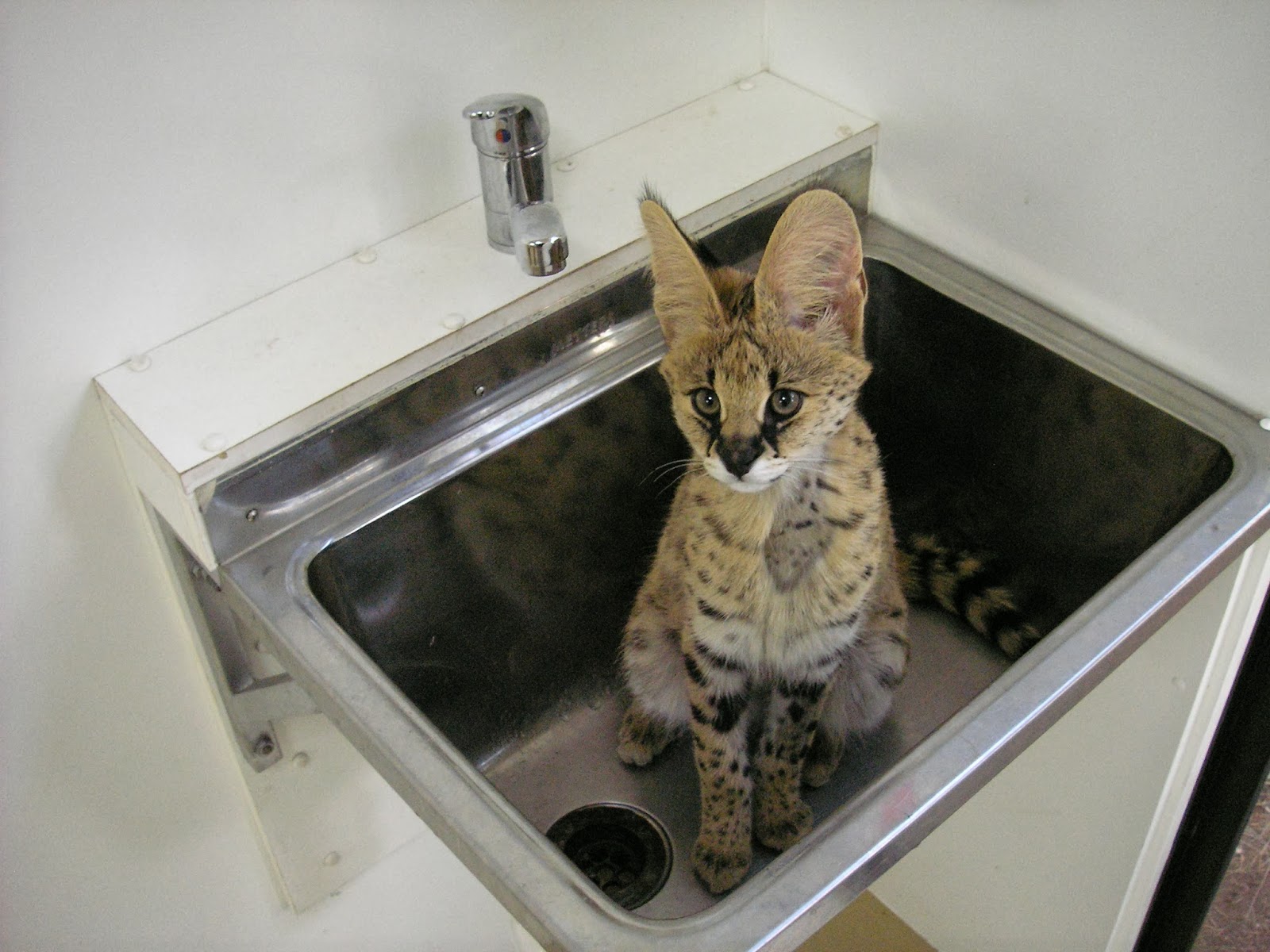 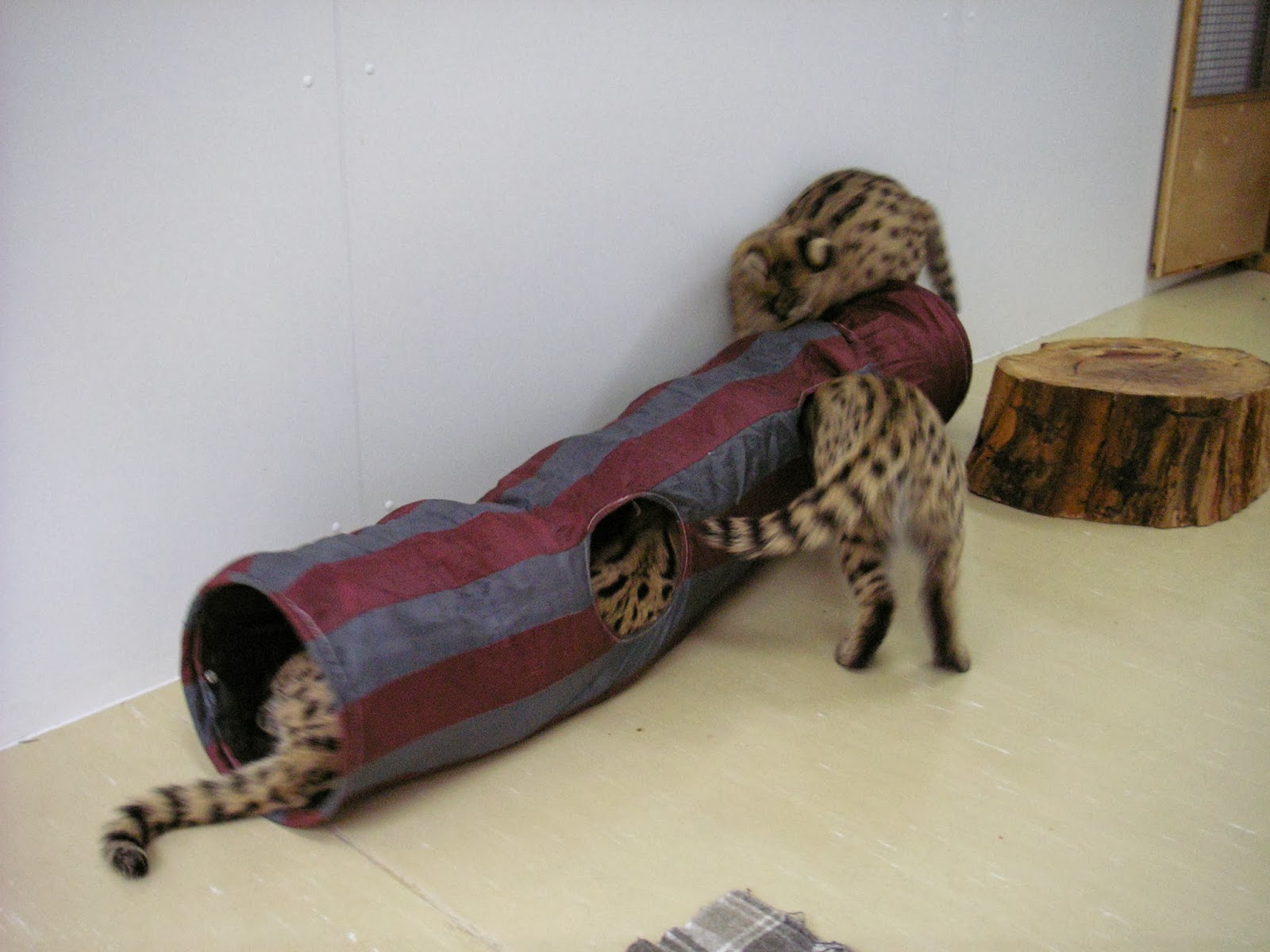 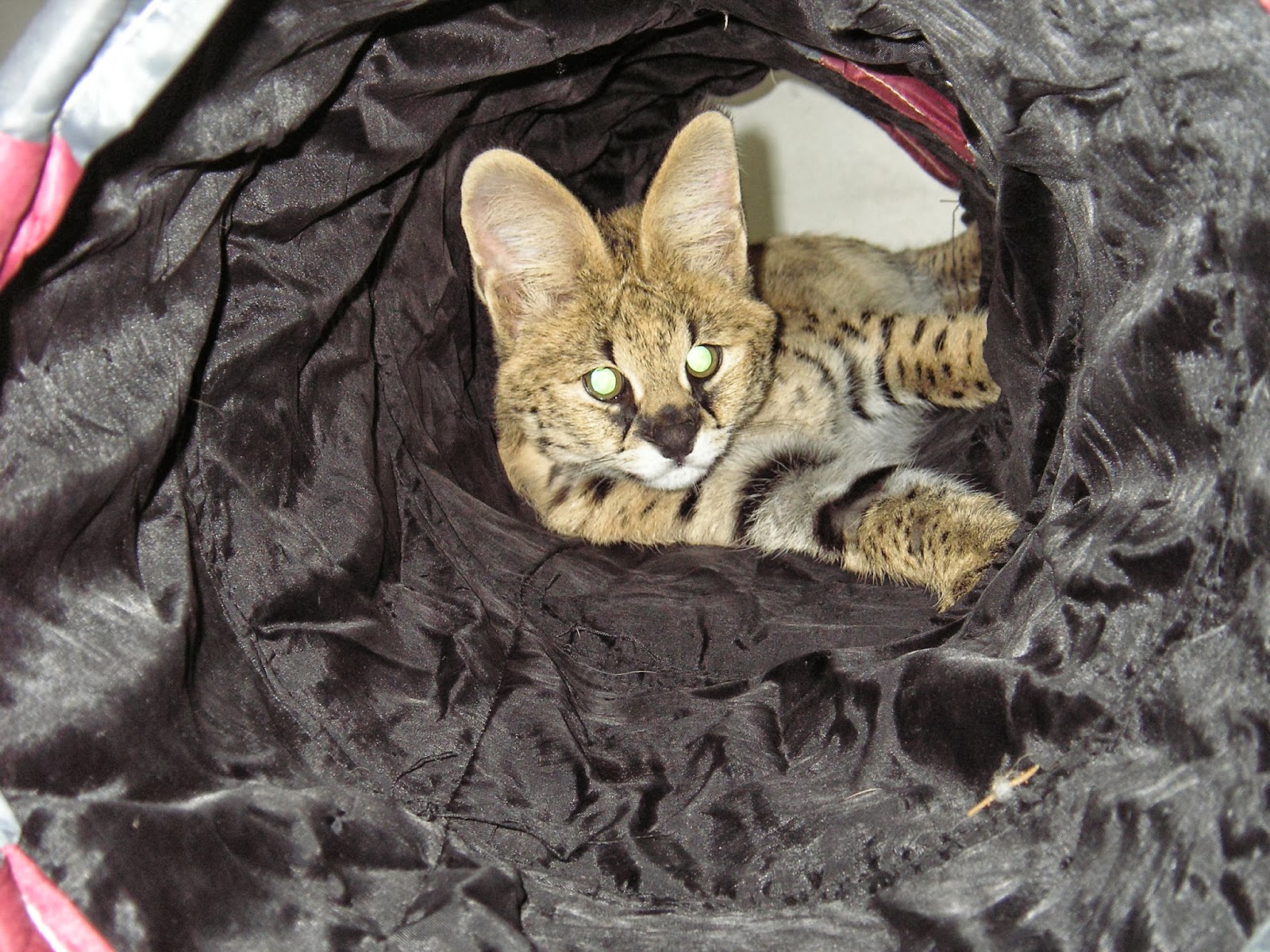 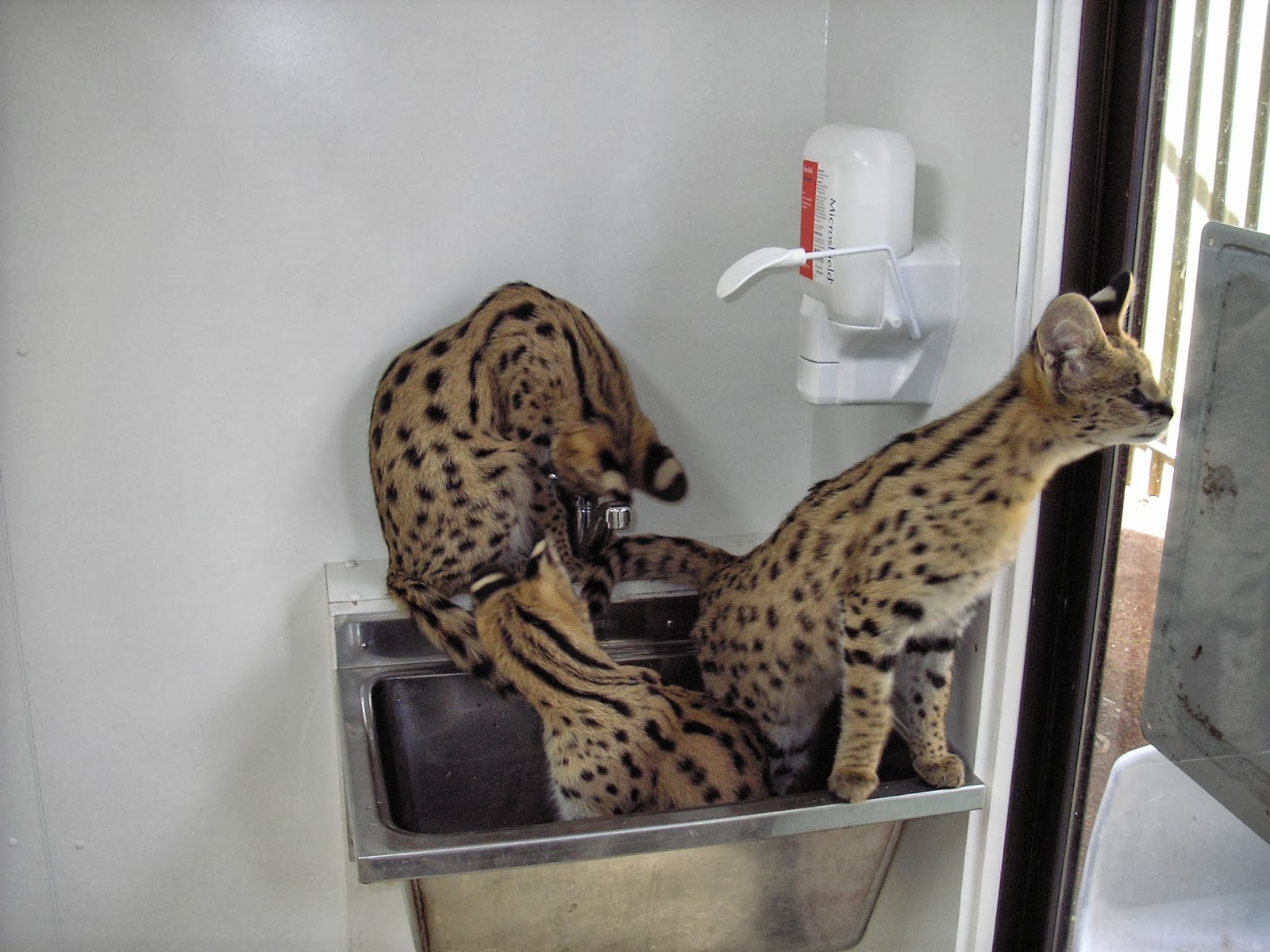 The initial housing on arrival was a converted shipping container that was also to quarantine them before settling into their current home. Quarantine is necessary to eliminate the possibility of bringing any disease into the zoo's greater collection and constitutes testing the animals (blood and feces) then waiting for the effective incubation periods for any pathogens to pass before re-testing. This period can be any where from a month or more. Our girls stayed here for three months as their enclosure was not yet complete so they stayed beyond their actual quarantine period.
It was a critical time in their lives and we spent about four hours each day training, feeding and playing with them. Each one had their own box and they were placed in this box before every meal in order to stop any quarreling over food and to teach or condition them that to be in this confined space would have a positive outcome and even offer them some security. This particular conditioning has been done every day and for every meal and has had far reaching advantages in their day to day management  as we can weigh, medicate, separate, transport and examine an individual and they are completely at peace with this. In order to get their food they need to wait their turn to be let out of the box where after they must step onto a log or "station" before being given the food reward. This has happened since the first day they arrived and it began with their milk feed and progressed to the current training reward of a piece of diced meat. 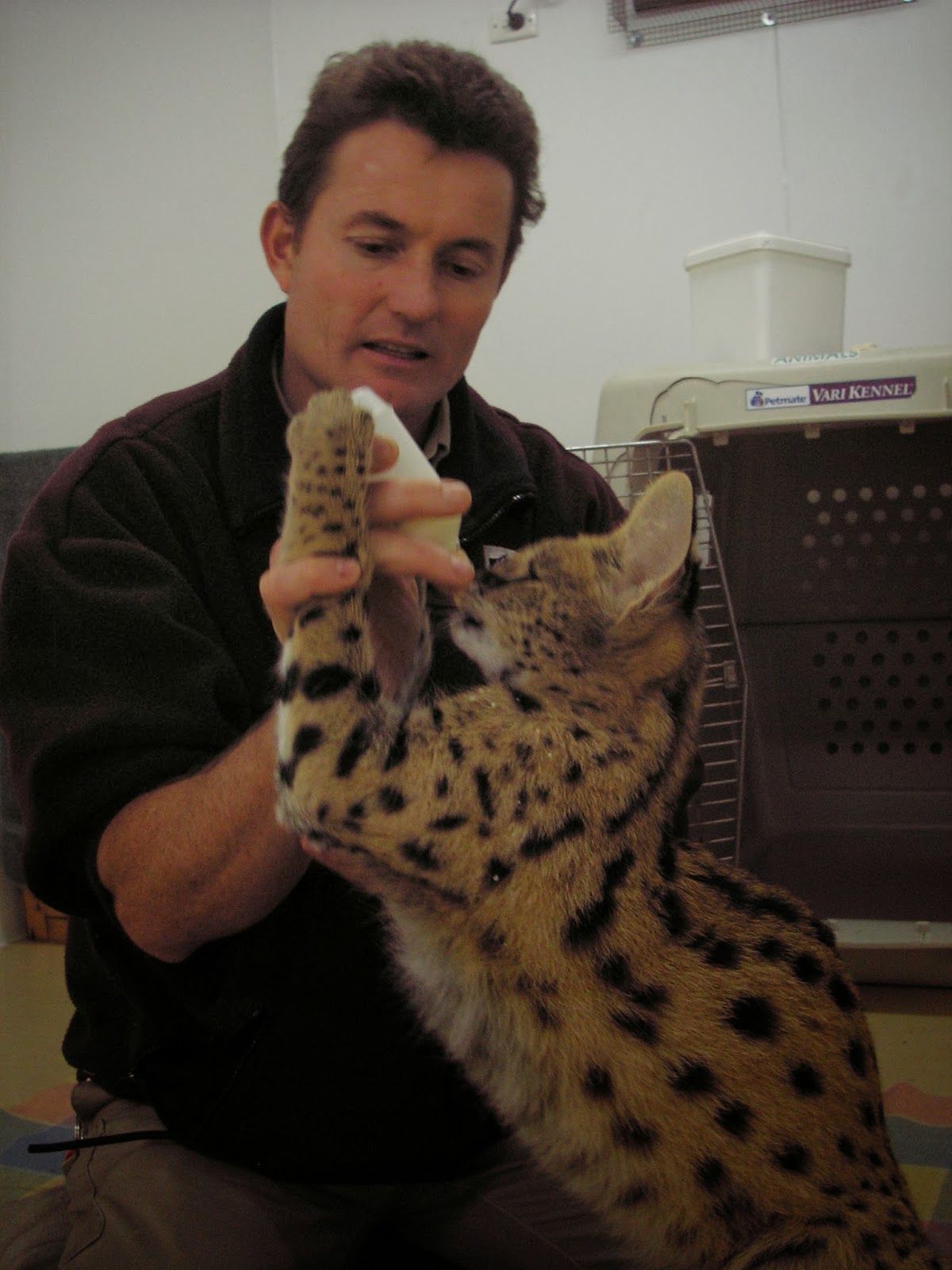 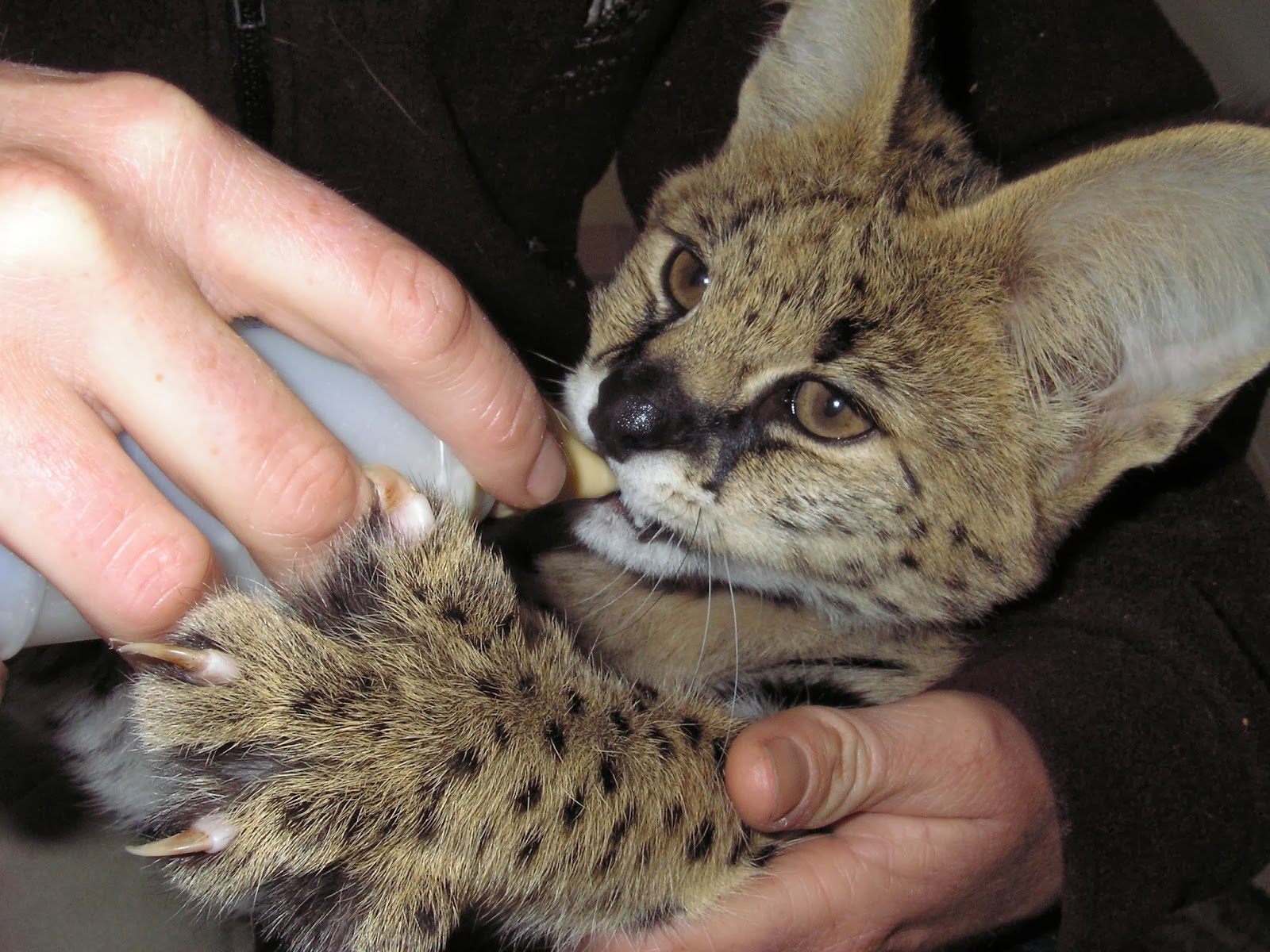 I often liken this part of the training process to calling a family to the dinner table as we can relate to that. I also remember how the servals had to learn their manners by keeping their sharp little claws to themselves!
another critical part of their training. 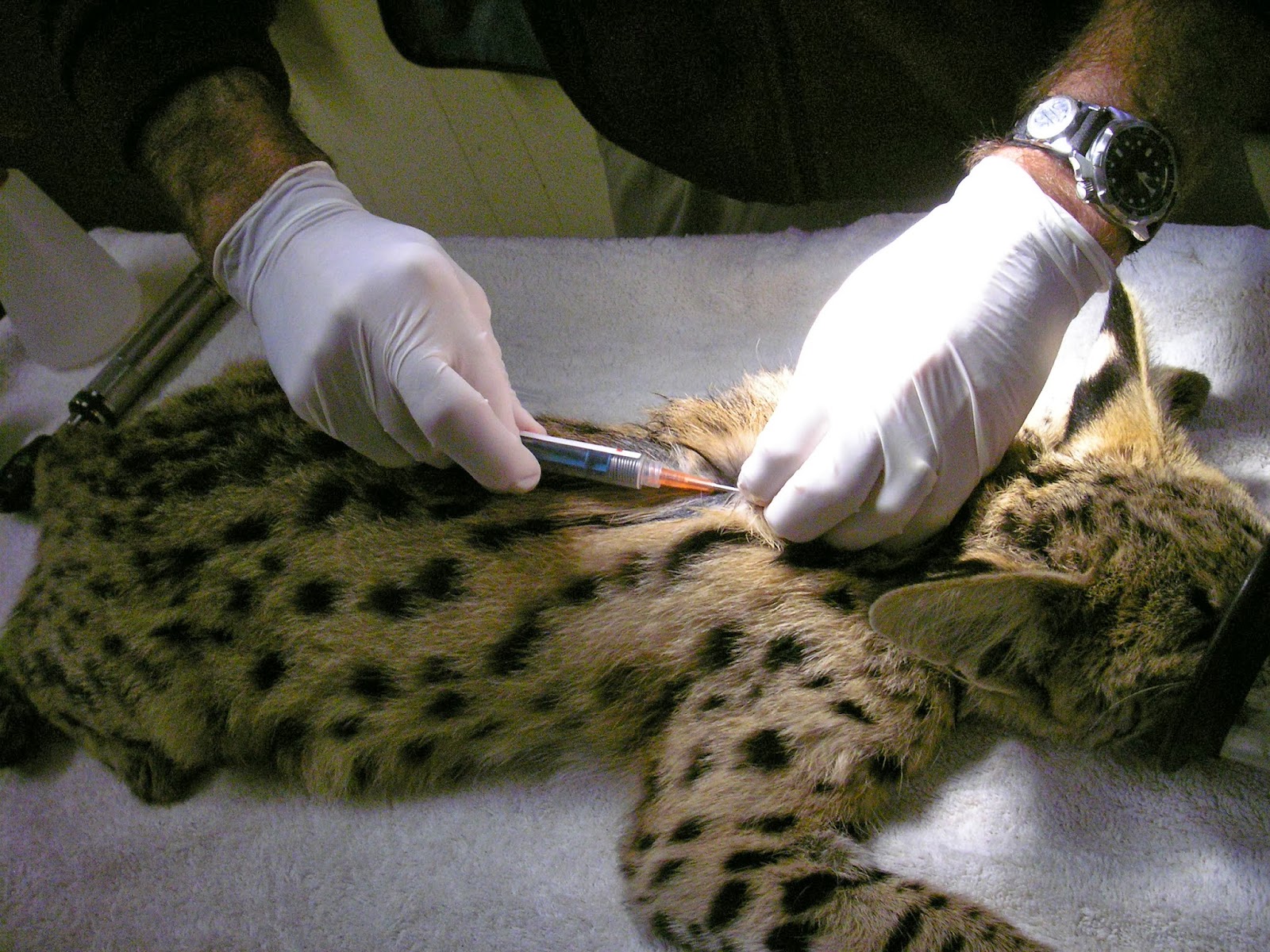 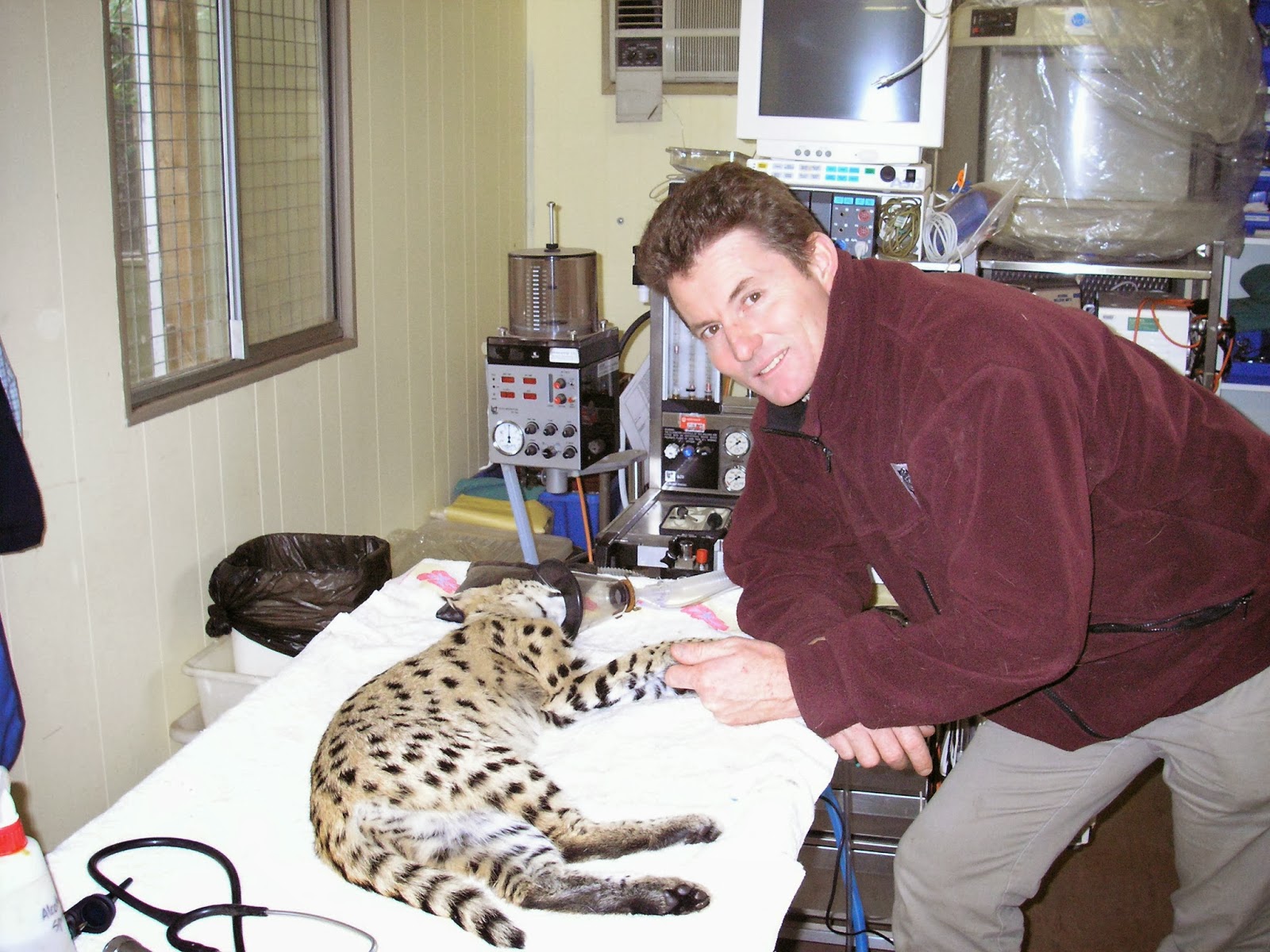 The previous two images show an examination under anesthetic or what we simply refer to as an (EUA). It is much better to put an animal under anesthetic while invasive tests are being done. The image where a large needle is visible shows how the microchip is being implanted between the animal's shoulder blades. Microchip transponders are important so that the individuals and their records are not mixed up. 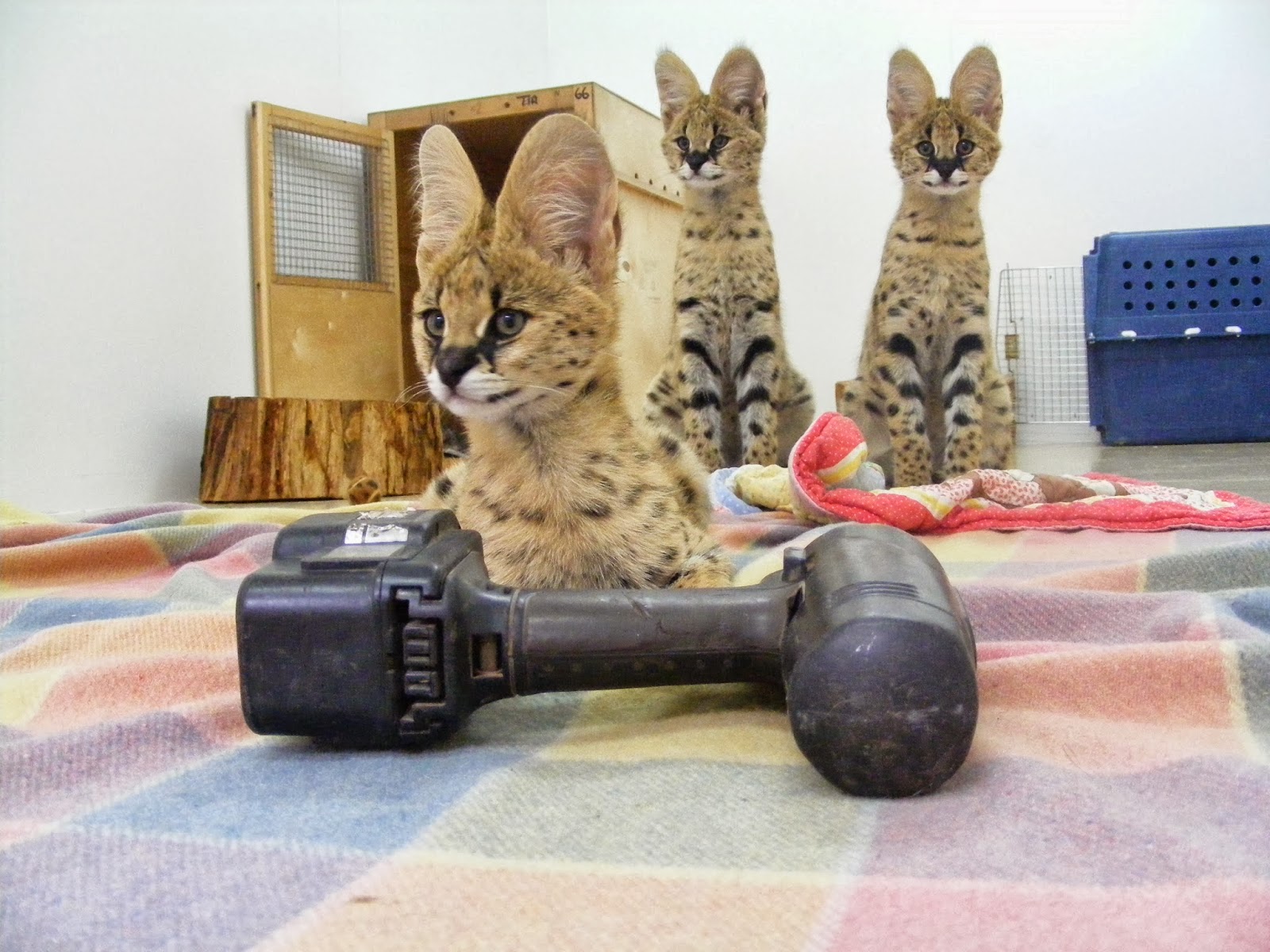 As they have grown there is one thing that has not changed and that is their personalities! The previous image shows how they were startled by a battery operated drill that I was using to mount a soap dispenser in the room. Nanki, the one in front has always been the leader and she was the first to investigate while her sisters Morili and Tula hid behind her and waited until she had solved the mystery by approaching the drill and killing it by stamping on it and punching it with her feet in true serval style. I hope to post a video that better illustrates this scenario.


Their names have significant meanings too; Nanki means undivided (Indian origin also from an Afrikaans poem), Morili means "women with a fiery tongue" although she only hisses when she is frightened and Tula means quiet.