Falcons and Kestrel - in our local area (Wyndham, Victoria, Australia). 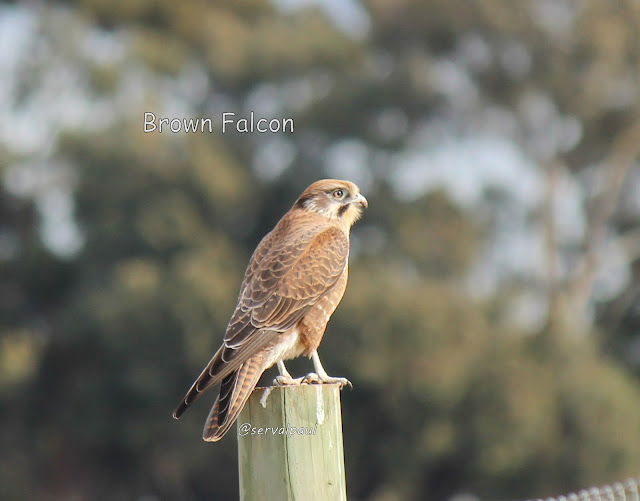 The Brown falcon  (40 - 50 cm) is the most prolific falcon by far and is often visible when perched out on vantage points such as power poles, posts and dead trees. They have a distinctive "kek kek kek" call usually uttered in flight that can easily help to separate them from the previously mentioned Eagle, Kites and Harriers.
Falcons do not build their own nests and this species will commonly use old Raven nests to breed.
Their coloration is extremely variable from light to very dark. The following image shows the outline of a rather light form. 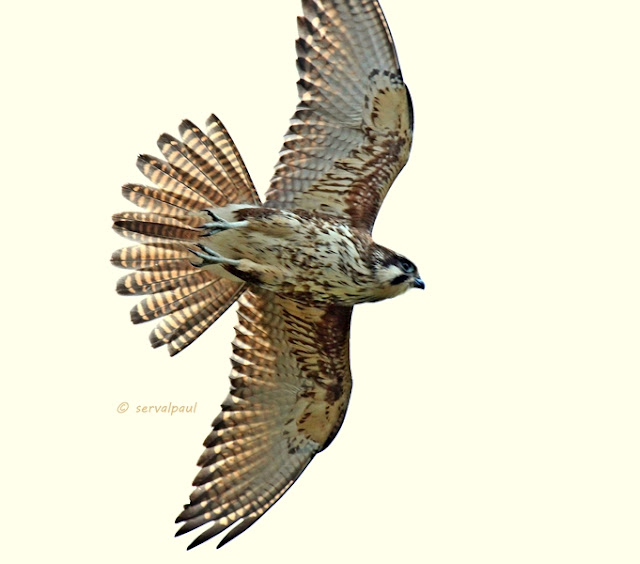 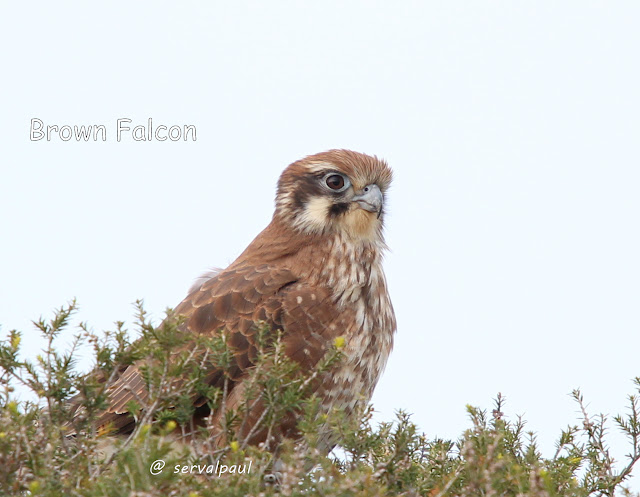 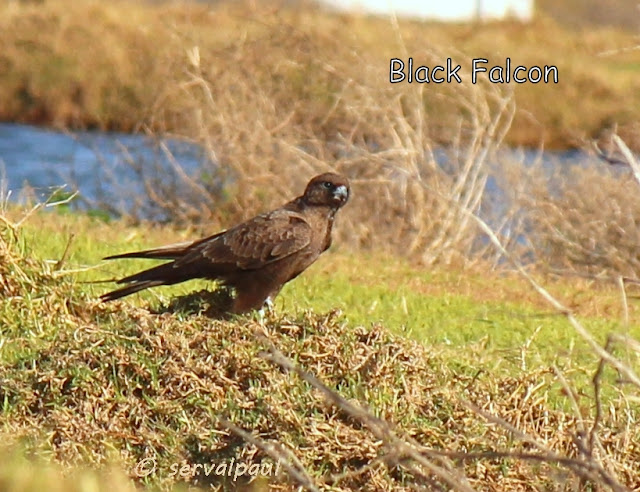 The Black Falcon may be encountered on rare occasions and it is possible to confuse this bird with a dark form of the previous species. It is almost black as the name suggests and old birds can become white around the throat. They are slightly larger (45 -55 cm), are much faster fliers and the shape of the wing (shown below) can be a great identification feature. 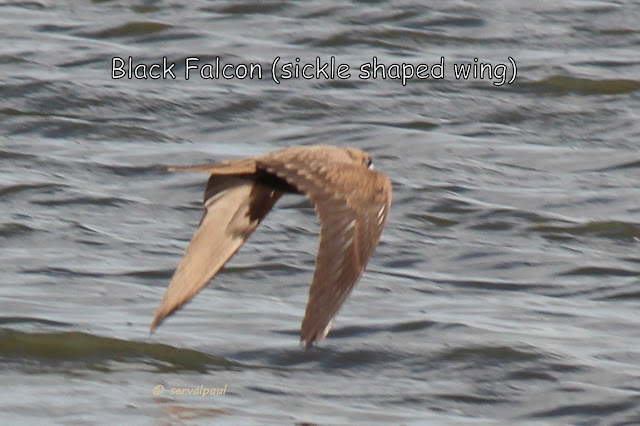 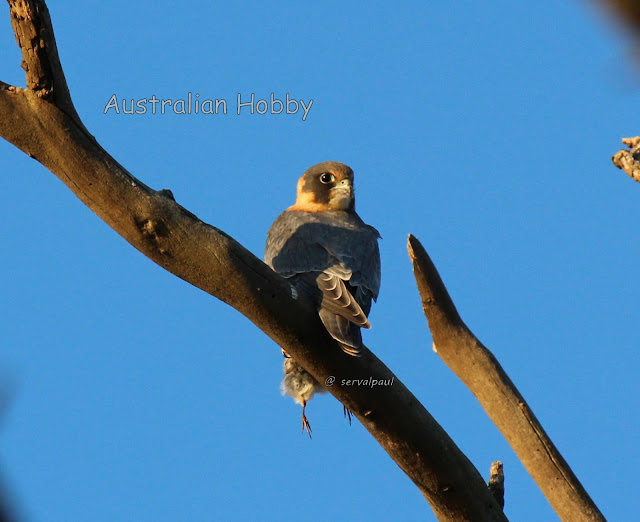 The Australian Hobby is a little (30 - 35 cm) fast falcon that hunts mainly small passerines (perching birds - note half plucked honey-eater in talons!). Surprisingly it is happy to frequent suburbia but this is probably due to the available food source. It is often crepuscular, hunting around dusk and dawn and likes to keep to areas with large trees for cover. 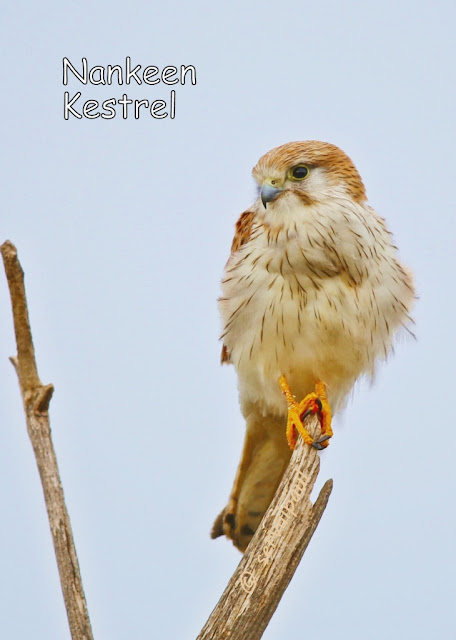 The Nankeen Kestrel (30 -35 cm) is the only Kestrel species in Australia and is in effect a small falcon - just slower - and is often seen hovering whilst looking for it's mainly rodent diet. They have a much longer tail  than the Black-shouldered Kite which also hovers, and red brown coloration as well as pale yellow (or 'Nankeen' - a color so named because of a pale yellow cloth made at Nanjing in China from a yellow variety of cotton!) . Both photos show females. Males have a grey head and are smaller. 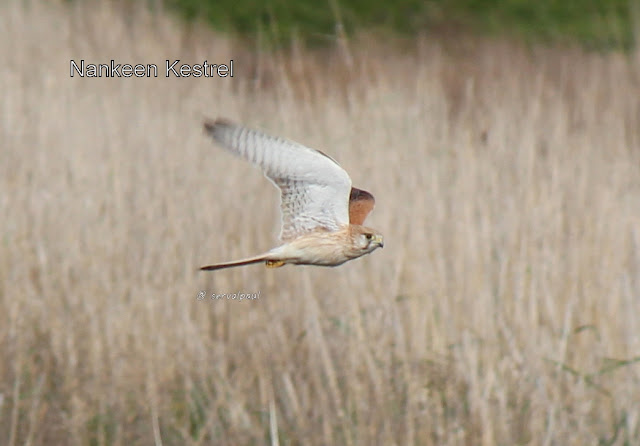 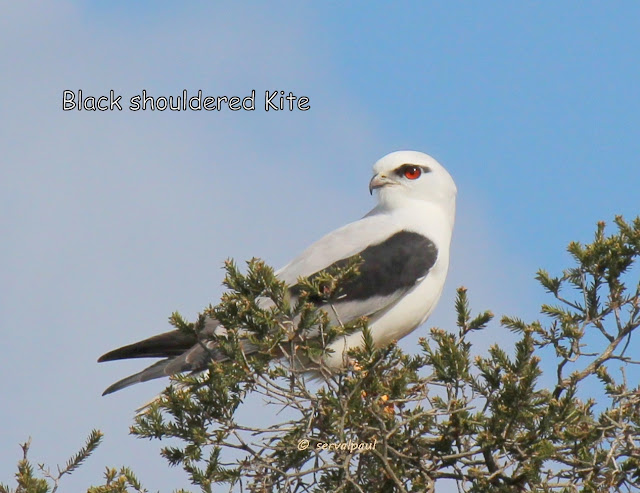 The Black-shouldered Kite smaller than the other two kites at (36 cm) - is the 'butterfly' among raptors. It is both dainty and colorful with it's red eyes and yellow feet contrasting with it's black and white coloration. Immature birds are brown with pale legs and eyes and can be confused with the previous species especially because they hover in much the same manner however they lack the falcon mask or hood. It is important to note that this Kite has a much shorter tail than the Kestrel and appears as a stockier bird. 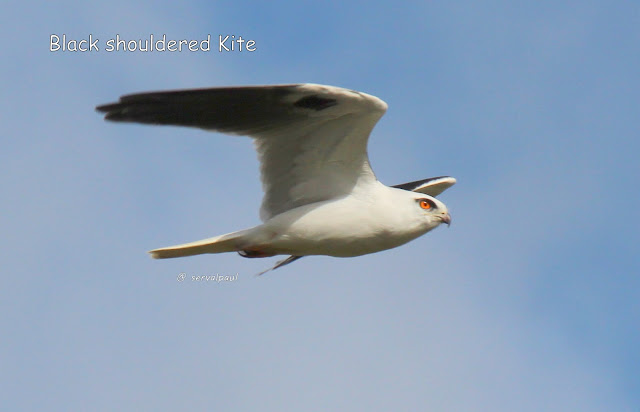 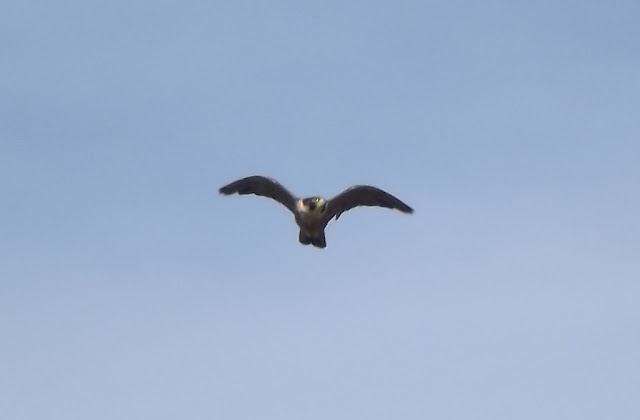 The Peregrine Falcon  (38 - 48 cm) - is a large falcon and the fastest of them all generally stooping at speeds of over 180 mph. (One is said to have been recorded at 242 mph or 389 km/h in 2005!). The name literally means 'wanderer' and they will sometimes migrate across the Bass Strait.
They are infrequently seen in the area and can be identified by their grey coloration, size and dark hood. Adults have horizontal barring across the chest and young have vertical streaks while some tend to have a light chest. The above rather poor illustration, was taken in North Queensland where this bird was attempting to hunt whistling ducks. Note the yellow around the eye.

Email ThisBlogThis!Share to TwitterShare to FacebookShare to Pinterest
Labels: Eagles