I am really fortunate to have what most would say is a "dream job" as a keeper at Werribee Open Range Zoo. If you hear me refer to myself as "servalpaul" it is because I predominantly look after three beautiful Serval cats, (a large eared, long legged grassland cat from Africa) among other species.
The Zoo is situated to the West of Melbourne and boasts a large expanse of land bisected by the major Werribee river which enters Port Phillip bay several kilometers down stream. With it's diverse habitat, the area is home to numerous species of birds.

There are five species that seem to confuse people the most so in this section I will attempt to point out some easily identifiable differences. 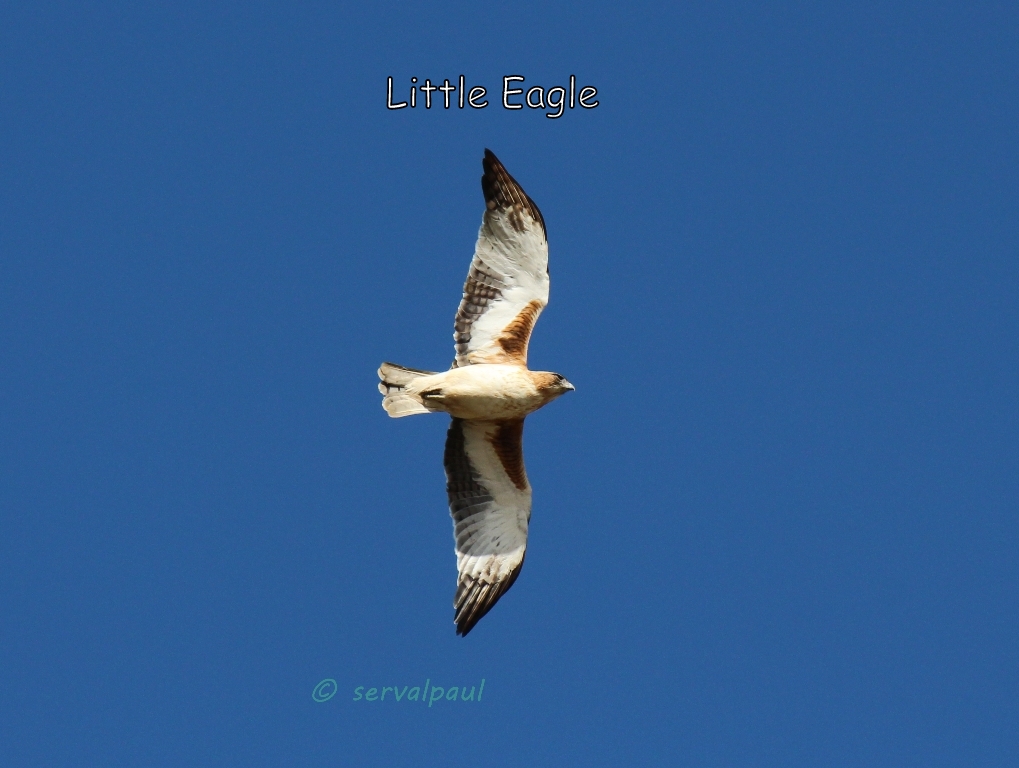 There are a resident pair of Little eagles on the property so they can almost always be seen. They are the smallest eagle (45 - 55 cm)  but similar in size to the Kites and Harriers I will mention.
The interesting thing about this pair is that one is a light phase bird (pictured) and the other is a dark phase (chocolate colored) bird. Colors can be helpful in identification but in this case will probably make matters worse! It is therefore necessary for me to point out more shape and proportion. The Little Eagle is stocky and fairly "square" in appearance but it's tail is short in proportion to it's body and the end is straight. When perched one might observe that the feathers extend all the way down to the feet. 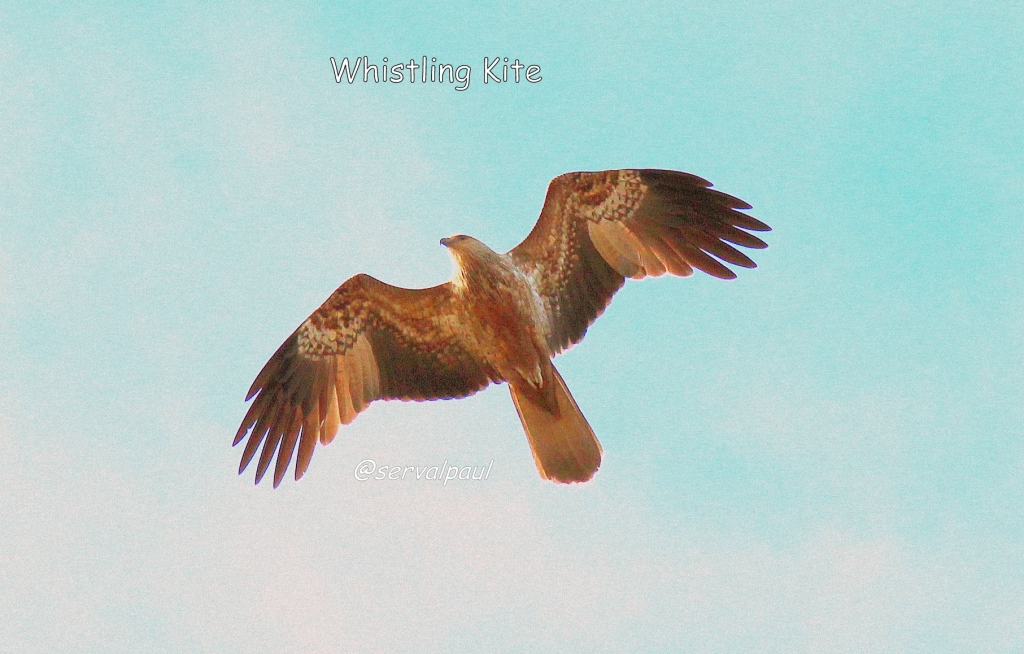 The Whistling Kite(53 cm)  is probably the most numerous and will sometimes be seen in groups. There is a pair currently building a nest over 20 m high in a gum above the Hippo off limit area.
Note the "M" or "W" angle of the wings in this bird as this is quite a common posture in flight. More importantly though, is the length of the tail in relation to the body, and convex (rounded) or "paddle "shape end is probably the most outstanding feature. Feathers do not grow down to the (grey colored) feet in this bird and its whistling call is distinctive. 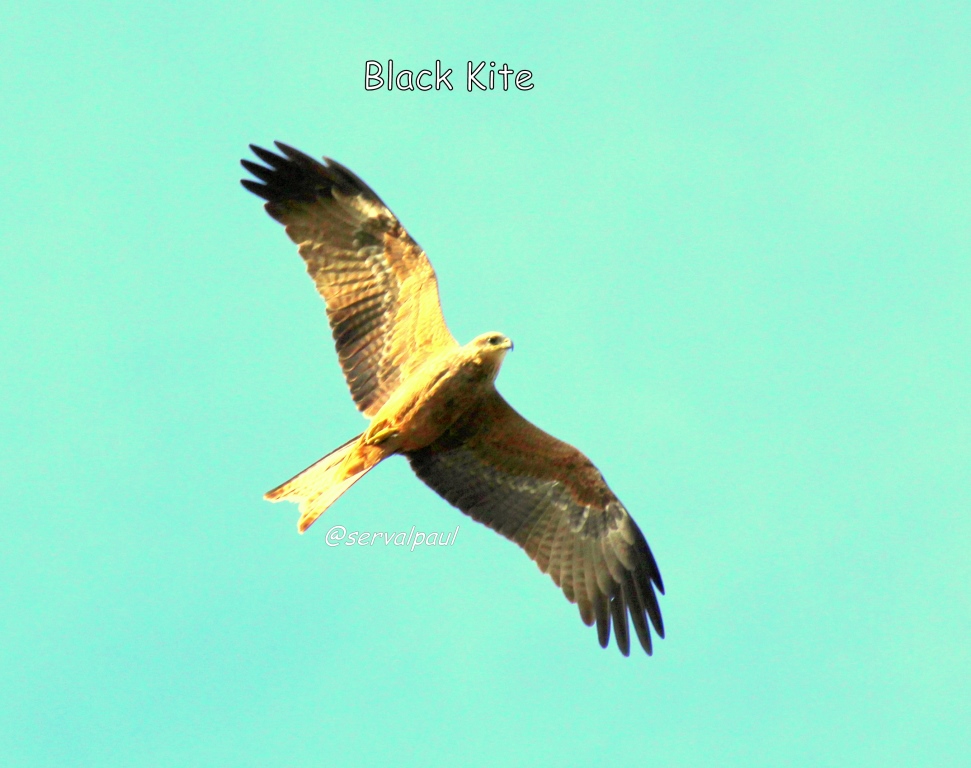 The Black Kite (52 cm) is similar to the Whistling Kite in shape and size but the main difference is that it has a concave or "fork" shaped tail. Sometimes it is found in association with Whistling Kites. Its legs are yellow in color. 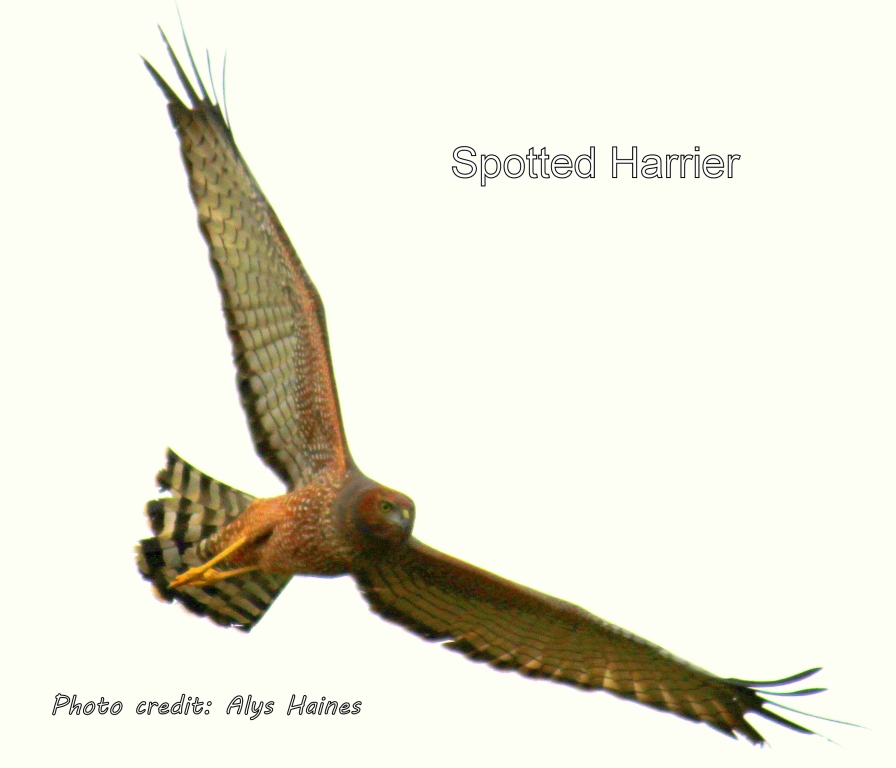 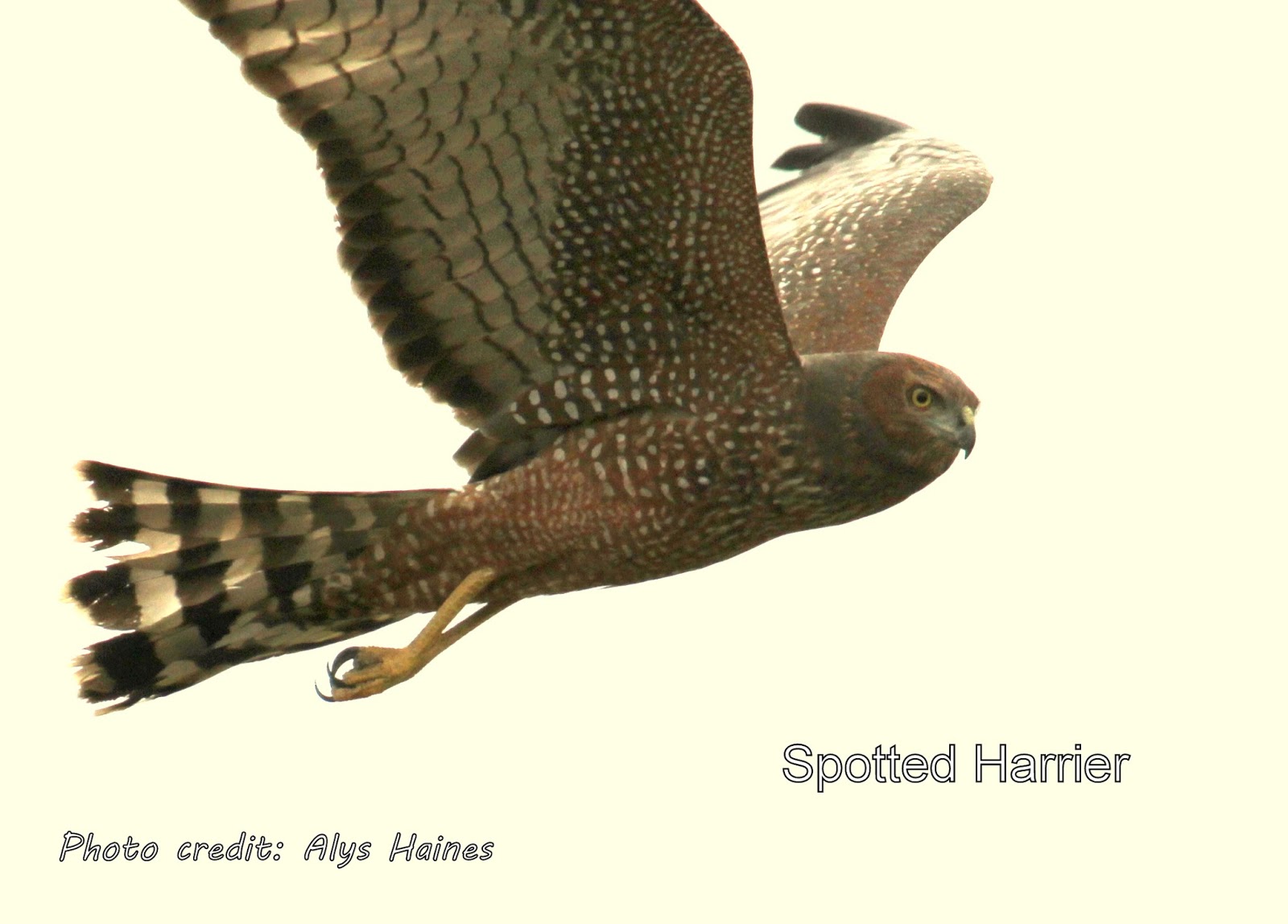 The Spotted Harrier (53 - 60 cm) has relatively long wings and tail as well as bare yellow legs. The white spots are normally quite visible over the brick red coloration in conjunction with the prominent barring of the wings and tail.
They tend to exhibit a rather "floppy" flight or they hang like a pendulum in a "V" shaped posture when hunting, as pictured. 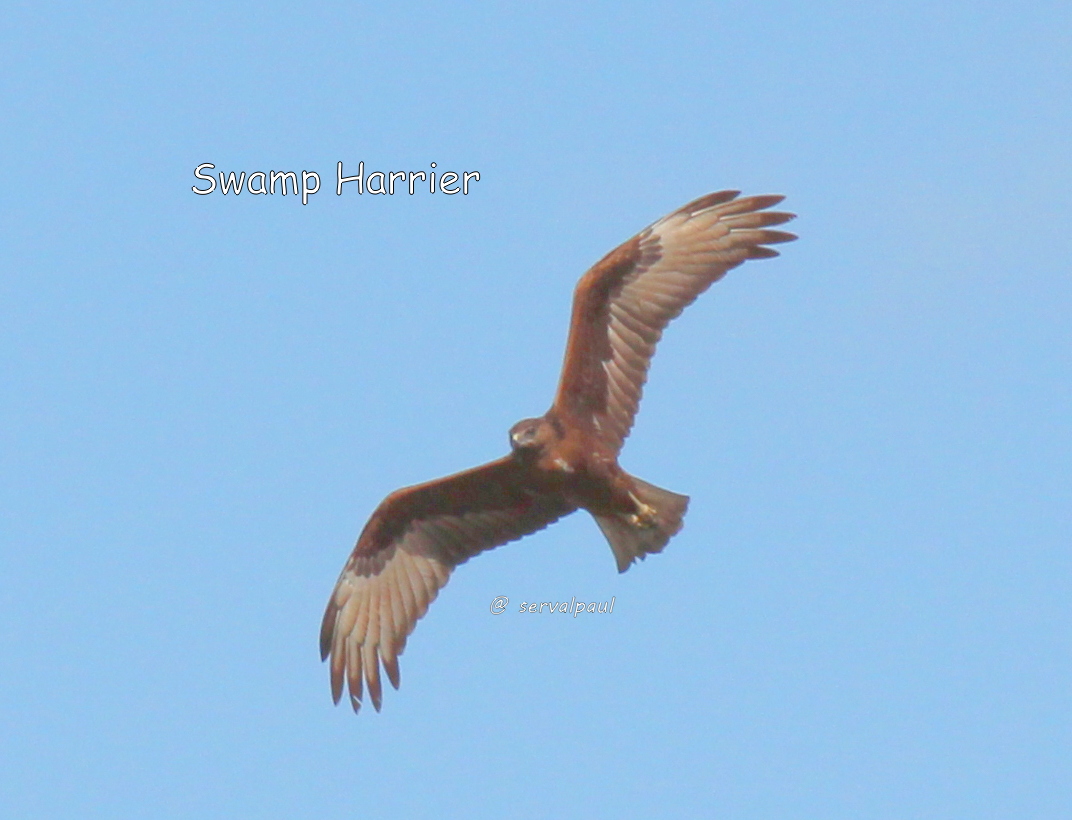 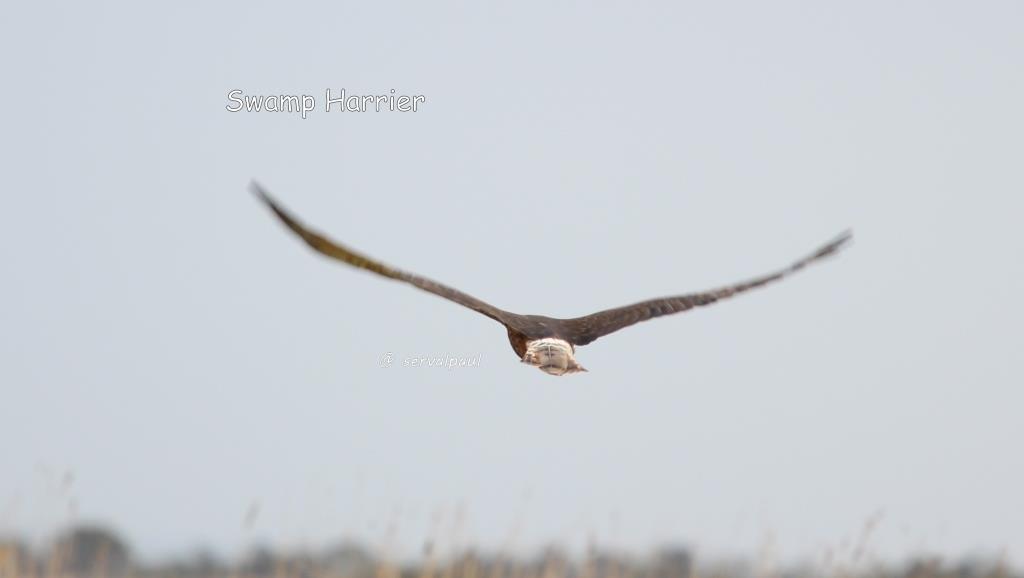 Swamp Harriers (50 - 58 cm)are similar to Spotted harriers in flight patterns and dimensions however they are dark chocolate brown in appearance. The white rump is a very important distinguishing feature but is not always visible.

I hope that this information will be useful for you budding birders out there. I will take a look at  some Falcons, the Nankeen Kestrel, and the Black shouldered Kite in the next post.

Email ThisBlogThis!Share to TwitterShare to FacebookShare to Pinterest
Labels: Eagles